What may have been the longest-running saga in Block Island’s history, the challenge to Champlin’s Realty Associates’ attempt to expand its marina into the Great Salt Pond, has finally, after almost two decades, come to a final conclusion.
After Friday’s decision was announced, Neronha issued a statement saying: “[Friday’s] decision by our state’s Supreme Court is a win for all Rhode Islanders not only because of what it means for the protection of our environment and coastal resources, but also because it reaffirms the principle that we were fighting for: regulatory agencies have to follow the rules and cannot engage in ad hoc, behind-closed-door, deals that ignore their own procedures and evidence for the sake of expediency.”
Read more in the Block Island Times.

Attorney General Peter F. Neronha trumpets transforming the office he has led for the past three years from an organization set back on its heels into one ready and willing to take on behemoths on behalf of Rhode Islanders. More in the Providence Journal.

Rhode Island police departments are poised to spend $16 million in state and federal grants to equip police officers with body cameras and cover the costs of managing and operating the equipment.
The architects of the Statewide Body-Worn Camera Program announced the grant awards to 42 police organizations on Wednesday as Rhode Island moved closer to a deployment of 1,773 cameras – roughly a camera for every front-line police officer, according to Attorney General Peter Neronha. Read more in The Providence Journal 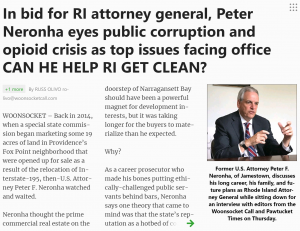